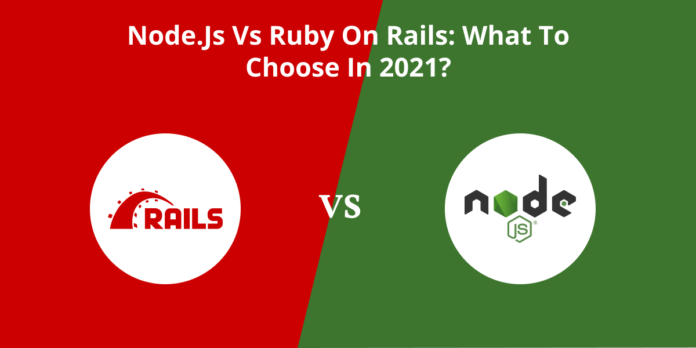 Web developers choose the framework they want to work with based on various factors such as scalability, productivity, and performance. Currently, two significant frameworks are quite efficient and have incredible capabilities for developing highly integrated apps, Ruby on Rails and Node JS.

RoR or Ruby on Rails is a framework written in the Ruby programming language under the MIT license. Developing a web app in RoR is much faster than any other frameworks due to its default structures.

This model-view-controller framework comes with several default structures for web pages, web services, and databases. Its initial release was sixteen years ago, in August 2004.

Node JS is an open-source framework based on JavaScript under MIT License. It is one of the most widely regarded frameworks due to its cross-platform feature, where it allows developers to use the same code base to run their applications across different operating systems.

This ensures fast and scalable applications that are lightweight and efficient. This framework is usually used for building data-intensive applications that have to work in real-time. The initial release of Node JS was 11 years ago, in May 2009.

Difference Between Ruby on Rails and Node JS

Built with the modern programming language Ruby, Ruby on Rails comes with innovative features and is adept in fulfilling the programming needs of the present day. The framework enhances the working capabilities of the IT tools and makes coding convenient and fast.

While Node JS has unbeaten performance when it comes to the runtime environment. The coding speed gets affected due to the JavaScript on which the framework is based.

Node JS allows developers to run countless processes simultaneously and hence is a better tool when it comes to scalability than Ruby on Rails. With Node JS, one can easily build highly scalable apps.

However, with RoR, a lot of resource investment is needed for added scalability.

The performance of the backend integration of the framework is crucial to consider while dealing with large projects that require complex coding. The engine that Node JS uses is the V8 JavaScript engine developed by Google. This allows Node JS to be faster and more efficient when it comes to multitasking.

Furthermore, being asynchronous and non-blocking in nature, Node JS gives the ideal environment for developers to carry out micro-tasks without any effect whatsoever on the primary application thread.

On the other hand, Ruby on Rails does not perform well when it comes to efficiency and is seen to struggle when there is high traffic.

The architecture of RoR is MVC or Model View Controllers, which reduces the work of developers by organising the code’s core functions and simplifies the whole process.

On the other hand, Node JS allows faster and more flexible development of modules because of its single-threaded event loop architecture.

Ruby on Rails is equipped with convenient testing facilities within its framework. On the other hand, node JS has to test and debug abilities through its third-party packages ecosystem, making RoR a clear winner in this segment.

Thus, both frameworks have their differences, advantages, and disadvantages regarding the different aspects of their functions and performances. The framework that the developer chooses will depend not only on their differences but also on the experience and preference of the developer. Therefore, understanding how each platform works and which backend framework they are compatible with is imperative before choosing one of them.

Types of Sensual Massages You Should Try Out

7 Ways to Get Paid More for Your Work

Data Science vs Data Analytics – How to decide which one...

Ford Ranger – The Pick-Up Truck of Your Dreams

5 Benefits of a Public Limited Company

5 Reasons Why You Should Not Make Your Own Laundry Detergent

How to Handle and Deal with a DUI Stop, and Why...