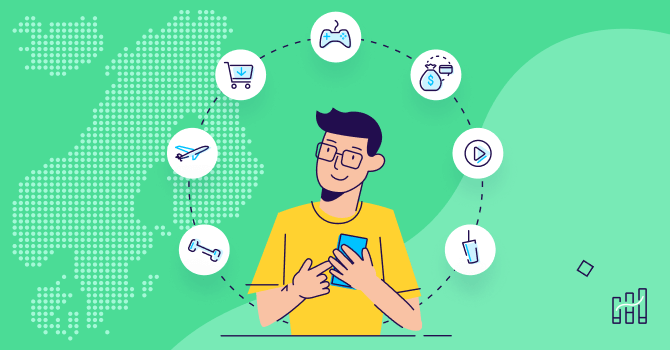 As of now, apps have become a necessity for meeting daily needs. In addition, they serve as a bridge for us to connect with reality in the market. They help people to overcome their routine problems with some taps on their devices. Hence, they formed a habit of utilizing their smartphones as there are solutions available for their every challenge.

The utilization of mobile has skyrocketed among people as their requirements get fulfilled quickly. However, almost no business segments are left to be introduced with apps, whether it is a restaurant, transportation, taxi, retail, etc.

But later, the storage of people’s devices became fully occupied with apps installed to gain individual services. Hence, there was an intense need for some solution to arrive in the market. Finally, the super apps were brought into the market, solving all the issues of people by providing them an on-demand facility similar to solutions launched before them.

So, let’s go through basic information about super apps, their rising importance, well-known examples, how to develop them, and the cost of creating them.

What are Super Apps?

The on-demand solutions which integrate all the sectors under a single hood are known as super apps. By using them, people can access any of the services they need to be accomplished through a single application. The entrepreneurs can also reduce the hassles of managing their ventures through different applications, and many other issues are solved.

Moreover, super apps are also helpful to the app users in many ways as they need to log into one application, and it occupies considerably low storage on their devices compared to the numerous apps kept installed on their devices. Due to specific points, these solutions gained importance among people from all over, and they are mentioned next.

The rise of super apps was first brought in China and later in southeast Asia and other regions. According to statistics, about 67% of people in America were interested in combining various services into a super app as their significance rose consistently among them due to specific reasons stated below:

People can easily access any services from the wide range of services available to them through these solutions and can also perform payment actions from them. As a result, they get their hassles reduced to a great extent as they get their job done within a few minutes from the platform.

The app users also get facilitated in terms of storage in their devices as these applications occupy meager storage compared to installing platforms for accessing individual services. And thus, this might be the reason behind the increasing significance of using super apps.

As gone through some factors that contribute to raising the importance of super apps, they started gathering an immense amount of traffic on the enterprises. Hence, many multi-services solutions across the globe have been launched. Let’s go through each of them stated next.

Some Popular Super Apps from All-Over:

Because of the rising importance of these platforms in the digital paradigm, many super apps are launched across different regions and have achieved a reputed position in the market. Consider each of them mentioned below:

It is a company founded in 2015 at Bogota, Colombia by Simón Borrero, Felipe Villamarin and Sebastián Mejía. Moreover, Rappi served food delivery services initially and is currently offering multiple services to the people across 9 Latin American countries and is generating yearly revenue of about $220 million according to the analysis of 2018.

Careem was founded by Mudassir Sheikha, Magnus Olson, and Abdulla Elyas in 2012, and its headquartered in Dubai. Formerly, it offered the car booking facility, later evolved with further advancements as a ride-hailing firm, and is currently providing various services across 100+ areas in the Middle East, Africa, and South Asia.

The company offers several services to people. However, Grab was founded by Anthony Tan and Tan Hooi Ling in 2012 and is based in Singapore. In its starting phase, a firm provided taxi services in Kuala Lumpur. Later they shifted their headquarters to Singapore and started serving multiple services with the name ‘Grab.’ In addition, they are running their business in over 8 countries and 400+ metropolitan areas.

Gojek is a southeast Asian company providing an all-in-one virtual marketplace to the people. It was founded by Nadiem Makarim, Kevin Aluvi, and Michaelangelo Moran in 2009 and is based in Jakarta, Indonesia. In its initial phase, the firm served four services: GoRide, GoSend, GoShop, and GoFood. Currently, it is offering multiple services through its application across 8 countries.

Now, you might be influenced to build your multi-services platform for your enterprise, so how you can create it is described next.

How can we develop Super Apps? Here are some tips which might help

When it comes to super apps, the first name that strikes in mind is Gojek, as it is one of the giant players in the Southeast Asian region. As an entrepreneur, if you are willing to gain a rise in the market by developing a app like Gojek or any other super apps the following are some tips mentioned below:

By surveying the market, you can get a basic idea about your competitors, features they provide, issues people face in their solutions, and what exactly the people need? After gathering all the information, you can now prepare the list of specifications.

After analyzing the market, you can quickly figure out the features that are missing in your competitor’s solutions the people need. List out those specifications and prepare a blueprint of the platform you want, which will help you create a prototype describing the fundamental outlook of an application.

The prototyping process would give you a basic idea about how it would look after it’s created and contain the required specifications and functionalities implemented. If any correction needs to be done, it is possible, as developing the application is not yet approached.

You need to select the specific platform for your solution according to the business requirements. Also, you need to decide the budget for building an application by surveying the pricing structures of different technology partners for particular platforms.

Now comes the main part, where you need to shake hands with appropriate development companies who understand and meet the requirements of an enterprise under a reliable pricing plan. After cracking a deal with them, start thinking about how to launch and promote your app?

When you receive the solution, launch it into the app store and promote it through several options available from a platform such as push notifications through Gmail or SMS, uploading posts on social media about your enterprise, as most smartphone users spend their majority of time on these platforms.

Cost of its Creation:

The cost of building an application relies on certain crucial factors based on your business needs. The parameters on which the cost of development is dependent are listed below:

The price of building an application is determined according to several points mentioned above. Thus, you might have got an idea about determining the cost of developing the desired solution. Furthermore, after receiving a platform ready for the venture, the entrepreneurs also get certain benefits in their business, which helps them to beat the competition.

As digitized solutions have become a necessity for people, you can take advantage of their requirements by creating multi-services platforms. All you need to follow are the tips for building a super app for your business which would surely help to raise your venture in the market and would probably assist people in making their lives more streamlined than ever before.

How To Design Logo For Tour And Travel Business? 9 Best...

All That you Need to Know About Argyodite

The Ultimate Guide to Reconstructing Your Damaged House

How to Ensure that Your Vehicle Is Safe

5 Irrigation Techniques Used to Save Water

IT Support and Why the Need for Staffing is on the...

Tips for Scaling up your Construction Company and Futureproofing your Firm

6 Apps That Made Our Lives Better