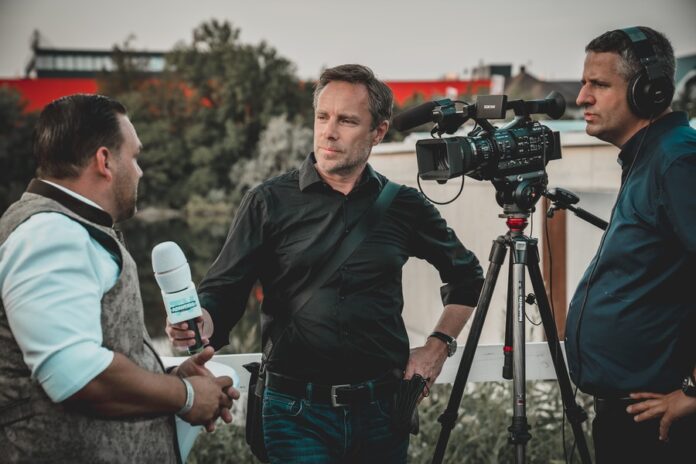 It is common knowledge that news anchors are the people who report on our world. Most of us enjoy watching them and listening to what they have to say, but how much do we really know about these professionals? How much does a news anchor make per year? This blog post highlights some interesting facts you may not have known about your favorite media personalities.

Who is a News Anchor?

News Anchors are also known as journalists. A person who presents television and radio news broadcasts for the public, either live or recorded.

There are two types of news anchors in general:

Roles and Responsibilities of a News Anchor

In order to know what work do news anchors do, go through the given responsibilities news anchors perform. Here is the list of their duties.

A bachelor’s degree in communications, journalism or television and film is required for pursuing career as a News Anchor. This bachelor’s degree lets you become eligible or qualified for getting work as a news anchor in a reputed media house or news channel. Some schools also offer Master of Arts degrees for News Anchors that will give you an edge in this industry.

Having following skills make you a stronger candidate to become a news anchor:

How Much Does A News Anchor Make?

When it comes to the earning or income of a news anchor, it is pretty awesome as the job required hard work and dedication. The answer really depends on the network and region where he or she works. The salary range for News Anchors varies from $30,000 to more than $100,000 per year.

The average salaries for television anchors are pretty high — especially if you’re in a major market like New York or Los Angeles. In these cities, a news anchor for one of the major local stations can make $100,000 per year (not including potential bonuses).

As you’d expect, the highest-paid TV news anchors are usually those who have had many years of experience and have worked their way up to high-profile positions. For example, Katie Couric is one of the most well-known news anchors in the country and makes a whopping $10 million per year.

News anchors may also earn money by doing voice-overs for commercials or film trailers because of their amazing voice quality.

The higher a TV newscaster’s salary, the more likely he or she is to be a network anchor.

They earn an average of $75K annually. According to BLS, the median annual pay for radio and television announcers was about $34.37 per hour or approximately $74,640 per year.

These are the salaries of some famous anchors in News Channels:

In other words, a news anchor can earn a pretty decent living to support his or her family.

How Many Hours a Day News Anchor Work?

The news anchors work 40-hour weeks with occasional over time. If they’re on air in the morning, for example, then they may have to come into the office a few hours before the show starts and stay later.

Most of the News anchors work officially from 9 AM to 10 PM, seven days per week, with a few working as late as 11PM or for programs that are broadcast around the clock.

Bonus Fact: In the United States, many broadcast news departments have eliminated anchor positions in favor of multiple reporters and anchors or a solo anchor.

The work environment of a news anchor is also very different from other conventional jobs and workplaces.

How to Get a Job as News Anchor?

After reading through the media facts about news anchors and news industry, you will probably be willing to begin your career as a News Anchor. For this, just follow the given steps and you will definitely end up acquiring a good start as a news anchor.

Step 1: Broadcast Journalism education is the first step. Most news stations and networks look for candidates who have a degree in broadcast journalism.

Step 2: Experience matters! In order to get experience, new anchors usually start out with small local stations or cable channels like CNN or Fox News. Smaller markets are a great place to start. Smaller stations usually don’t have as many anchors and it’s easier for new talent to stand out.

Step 4: Networking is key! News stations and networks hold regular auditions for new anchors. Make sure you go to these auditions and do everything you can to get an in-person interview.

These were the amazing media facts about news anchors and how much does a news anchor make. So, are you ready to boost your career as a news anchor? Do share your feedback in the comments section.

5 Innovative Strategies Businesses Are Using to Connect With Younger Generations

5 Signs Your Business Should Implement an ERP System

The Best Drug Rehab : Important Things You Need to Know

Love To Cook? 5 Items You Need To Up Your Game

What are the causes of water heater leaks & how to...

App Development: How businesses benefits from it?