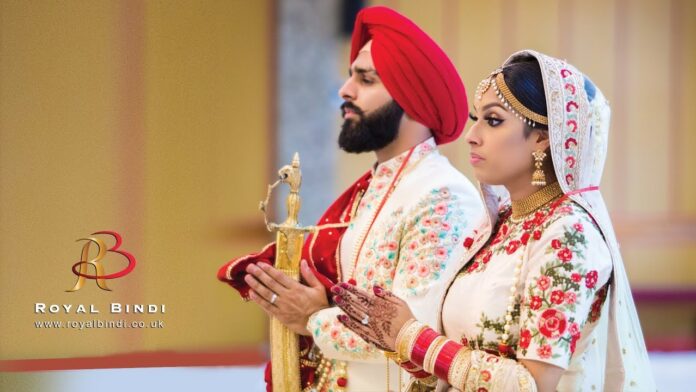 A Sikh wedding that takes place as per traditional rituals is undertaken at a Gurdwara, and the ceremony is called Anand Karaj. The literal meaning of Anand Karaj is “A blissful union”. Sikh couples marry in front of the Sikh religious book Guru Granth Sahib, and guests stand or sit around them. After a bit of friendly banter at the entrance, family members and close friends of the groom are greeted and welcomed inside by serving tea and Milni.

Men attending the wedding are on one side of the couple and women are present on the other. The Sikh priest, also known as Giani, reads out a prayer called Ardas from the Guru Granth Sahib. After this, both parents are formally introduced to each other. Other members such as aunts, uncles, and siblings are also introduced. During this entire period and other rituals, good quality Sikh wedding photography in London is done.

Rituals Before the Wedding

A few standard rituals are undertaken some days before the actual wedding. These have unique names and have been described below:

Kurmai – This is the name given to the engagement ceremony, which marks the starting point of the wedding celebrations. The rituals begin once both families read the holy Guru Granth Sahib together.

Maiya – Before the wedding day, the bridegroom and the bride are not permitted to leave their homes at any time

Mehendi and Chooda – The bride and other women in the house get beautiful mehndi designs on their hands, with the bride getting designs in her feet as well. She wears red and white bangles that are brought by her maternal uncle. These ornaments are first dipped in milk before giving away. The bangles are often attached with Kalires or golden ornaments.

Gharoli – Sisters-in law on both sides bring holy water from the Gurdwara. This is subsequently used by both bride and bridegroom to bathe

Gana – Sacred red threads are tied to the hands of the grooms and brides. The threads are meant to help them get over bad omen.

This is the name given to the four verses chanted when the Sikh couple takes pheras, or go around the Guru Granth Sahib. Wedding hymns that are part of Laavaan are indicative of the four stages of love, the meanings of which have been given below.

Meanings of Verses in the Lavaan Phere

Each verse here has been written by Guru Ram Das, the fourth Sikh Guru. Every verse is sung aloud by Ragis. During this time, the groom and bride walk together with a palla between them. Meanings of the verses are as follows:

The 3rd verse is meant to describe the bride’s detachment from external influences and the world, which is replaced by devotion towards her husband. She also vows to live only for him.

The 4th verse brings forward a spiritual union of love and devotion with no chances of separation, and the presence of joy and contentment in life. Upon the end of these verses, Anand Karaj is complete and the bridegroom and bride are declared man and wife.

Every wedding and other events related to it have guests and the brides and grooms wearing a plethora of colours to look grand and classy, and this can only be displayed through the lens of a photographer. Other than the elegant mix and match of outfits, it is also wonderful to see the expressions on various faces at different times. Photographers have to know about the ceremony and other events well enough to be at the right place and at the right time.

Men invited to Sikh weddings are often found wearing Western suits in dark colours, although some may be able to carry off lighter colours. At the Anand Karaj women will be found wearing traditional Punjabi dresses in bright colours. These are usually replaced by plunging necklines and short skirts during the Reception, which is usually a day or two after Anand Karaj.

What do Brides and Bridegrooms Wear?

Photographers will find Sikh brides wearing red lehengas or wedding salwar kameez, both of which are regarded as suitable for the rituals. The bright red colour of the lehenga symbolizes imminent prosperity and auspiciousness in the new life. Bridegrooms on the other hand wear kurtas on which sherwanis are worn. With most Sikh men being tall and broad, these Sherwanis, with their gorgeous print, make them look spectacular, thereby presenting several photo opportunities.

A Simple Beauty Guide on Improving Your Appearance

7 Facial Products You Should Look Into

NBN Networks across Australia that are trusted by the consumers

The Insurance Guide For Business Owners

Know These Top Differences Between Commercial and Residential Buildings

Moving with Your Family: 4 Things to Consider

How To Style Golden Jewelry Effortlessly?

How Can You Use Different Types of Personal Loans for Lifestyle...

9 Tips You Can Use To Avoid Hair Loss

A Simple Beauty Guide on Improving Your Appearance