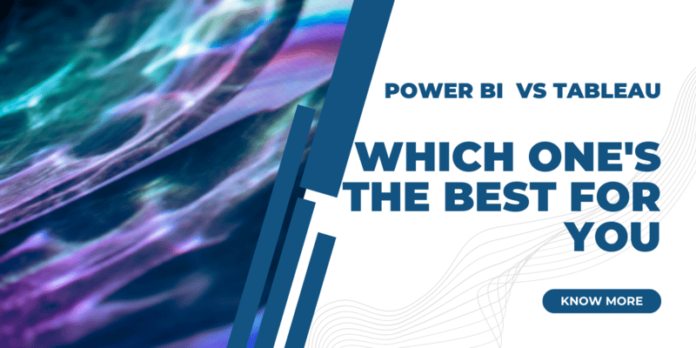 Every day, new competitors enter the market for data visualization and analytics, while big brands acquire smaller up-and-comers. A tool must have a unique combination of power, ease of use, brand awareness, and price to remain at the forefront of the data analytics domain.

Because both of these products contain this secret sauce, many teams compare Microsoft Power BI vs Tableau when looking for the best data analytics solution. For obtaining, integrating, analyzing, and displaying corporate data, two well-known business intelligence (BI) tools are Power BI and Tableau.

They help you interpret and get meaning from company data by doing data analysis, data manipulation, and data visualization. But which one is best for your business?

Let’s find that out in this blog!

What is Power BI?

The Microsoft Power BI portfolio includes business intelligence (BI), reporting, and data visualization solutions and services for both individuals and teams. Power BI distinguishes itself by effective publishing and distribution options, as well as integration with other Microsoft services and products.

Power BI interacts with a variety of data sources, including Microsoft Access, SQL Server, PostgreSQL, and Excel workbooks. Then, with this data, you may construct whatever visualization you like. Your information can also be input manually.

That chart might be a pie chart, bar chart, funnel, R and Python Visual, or even a Q&A. Power Bi is an effective data visualization tool.

A tableau is a visualization tool that is rapidly growing in use and has several business applications. It is highly sought after because of how simple it is to use. It is frequently used in business intelligence processes (BI).

Different types of graphs, plots, and charts can be placed in Tableau so that they can be viewed simultaneously.

Tableau is capable of working with any form of data, including structured and unstructured datasets, and has access to all major languages, including R, Python, SAS, and more.

Microsoft Excel, Microsoft Access, and Google Analytics are just a few of the many data sources that Tableau can access and interface with. Even JSON, text, statistical, and geographical files can be used with it.

What are the differences between Power BI and Tableau?

Power BI is easy to use. It is faster and performs better when the volume of data is limited. Power BI tends to drag slowly while handling bulk data. 15% of users provide feedback about the solution’s performance, including its robustness and speed. Due to fewer consumers encountering delayed service, Power BI surpasses Tableau.

The community is more supportive of older technology. Compared to Tableau, Power BI is a relatively new product. Its user base is less than Tableau for this reason. It facilitates collaboration among Tableau users.

For those with only a basic knowledge of Microsoft Excel, Power BI is simple to use. Tableau, on the other hand, is a little challenging to use, so it’s best left to experts and knowledgeable users. In general, Power BI outperforms Tableau, especially for users who are accustomed to Excel and other Microsoft programs.

The user interface for Power BI is intuitive, and it connects easily with other Microsoft apps. The Power BI user interface is easy to understand and operate. It is easy to use and makes it possible for you to work more productively. Tableau offers a comprehensive user interface that enables you to create and customize dashboards according to your requirements.

Overall, Power BI is less expensive than Tableau, with a free edition, a monthly subscription, and a more expensive scalable premium version. Despite being a Microsoft product, Power BI customers do not have to pay for Office365 in order to access the tool’s admin center interface. Subscriptions and users, however, will be charged.

Tableau’s pricing is a little more perplexing, most likely due to the company’s recent transition from a bulk buy to a subscription arrangement. The present pricing structure is a tiered system that differentiates between various user kinds. Some producers can construct visualization models and add data sources, explorers can change existing visualizations to answer their inquiries, and viewers can view the models generated by others.

Power BI may be linked with Microsoft Azure for data analysis and pattern identification in cloud operations. Tableau has built-in machine-learning features that can be used for data analysis.

Power BI is excellent for small and medium-sized businesses. Because of its flexibility to manage larger data chunks, Tableau is ideal for medium and large-scale enterprises.

With the ‘Embed’ option in Power BI, you can easily embed reports. Users can embed and show reports on internal web portals using this feature. Embedding reports for a different environment than Tableau is a difficult undertaking.

Users who use Power BI appreciate the multitude of filtering tools, which enable them to swiftly slice and dice data from a variety of sources. They also like that the functionality is similar to Excel and hence feels familiar. In fact, approximately twice as many Tableau customers complain about the filtering feature as Power BI users. When it comes to filtering, Power BI easily wins due to its Excel-like functionality.

Users can modify data before putting it into data visualization apps using Power BI’s query editor. The capacity to change the data makes it easier to separate unstructured data, undesired portions, and inaccurate sections. This feature is not available in Tableau. Data must be manually changed before being entered into Tableau.

Because Microsoft owns the Power BI data visualization software, it can only be used on Windows-based computers. Tableau, on the other hand, is compatible with both Mac and Windows operating systems.

Which One to Choose:

Power BI and Tableau are both sophisticated data visualization solutions with distinct capabilities. You should select one of the two based on your needs, scalability, data size, and available resources. Professionals with data visualization expertise are in high demand, according to current technological developments. However, given the demand-supply gap for such data professionals, it would be wise to engage them today.

Logistics between the US and Mexico

Cybersecurity: How Beneficial it is to Prevent Online Crime?

Digital Transformation: The Top Priority of Finance Leaders in 2022