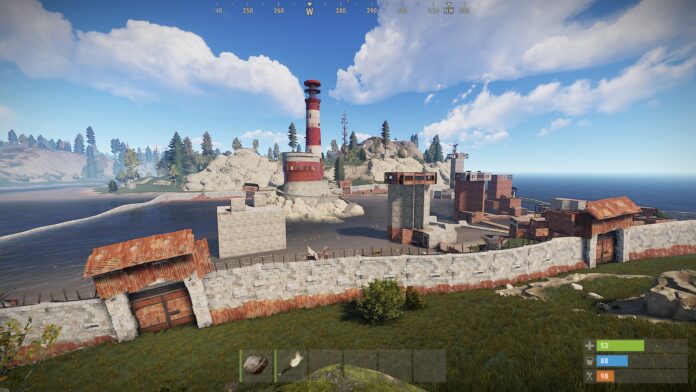 Rust is a mysterious and dangerous survival game. You could be easily murdered by a bear or destroyed by a gang of individuals who never seem to stop playing. There are many weapons to protect yourself with, ranging from firearms to swords, but how will you obtain the materials and rare artifacts required to buy these weapons?

Rust Monuments will assist you in any way possible in obtaining the best possible products. Monuments are premade locations that appear randomly on the map you’re playing on and include a variety of loot items as well as numerous dangers.

Some monuments are not as easy to enter as you may expect due to the extensive preparation required, while others are simply walk-ins. It all relies on what you’re doing and how much preparation effort you want to put in ahead of time.

5 Most Common Monuments in Rust

These are small, non-radiated places where a player can travel, consisting of two old wooden cabins. Since there are no ecological threats in this region, you don’t have to be concerned about dying quickly. There are also a few Stuff Crates strewn over the area, each containing some nice loot. Cabins are a great location if you intend to ambush other players.

Every level you play on has an airfield, a relatively wide, flat region with two runways, three hangars, watchtowers, and an office building. There are tunnels beneath the Airfield, which concrete ladder holes can access. Every structure in this monument can be fully explored, and there are heaps of Loot Crates and Barrels strewn about.

This monument is also among the most popular in the game since it is not difficult to access, and the reward is excellent. If you have some decent melee weapons and gear, visiting this monument is highly recommended, as you should be able to defend yourself against other players. Also, because the location is slightly irradiated, make sure you dress appropriately.

The camp is made up of multiple cottages that are home to Merchant NPCs and highly armored Bandit Town Guards. Merchant NPCs will offer military-grade weapons and explosives, meals, and supplies such as HQM in exchange for Scrap. The guards will attack any player who’s unfriendly to another player within the Bandit Town, so it is a relatively safe place to be in if you’re looking to avoid conflict. However, be careful, as the guards will also attack any player who assaults a guard or breaks a barrel inside the Bandit Camp.

There’s also a renovated area with a Casino where gamers can bet on a wheel that looks like roulette.

Players are not allowed to bring any dangerous weapons inside the game area, and if they do, the guards will give them four seconds to put the gun away before firing. This is an excellent monument to visit early in the game to obtain valuable stuff.

The Cargo Ship, also called the “CCSC Lazarus,” is a mobile monument that spawns only at specific times. When it spawns, it will slowly circle the entire map a few times before leaving. If you can’t get on board in time, the ship will leave you with radiation poisoning. Keep in mind that this massive vessel is home to a large number of scientists.

On the ship, you’ll be able to fight the Scientists and obtain keycards and weapons, as well as a plethora of Loot Crates and Barrels. If you can successfully board the ship and kill all of the researchers, you will be rewarded handsomely.

A cave is a natural landmark that can be found on almost any randomly created planet. These caves usually contain some challenges to solve as well as valuable rewards. There are additional areas within the Cave where you can create a foundation for excellent security.

Apart from these Rust monuments, there are nine possible Cave layouts, three for each Cave type.

Little Caverns — There are three alternative layouts for the small caves, all of which have a single entrance and exit. Inside the caves, the riddles are non-lethal and straightforward. They also have one or two construction rooms.

Medium Caves — Each of the three medium cave layouts will have two or three entry sites. The network complexity is more difficult to remember, and they may also include a single lethal trap. The problems are a little more challenging, with two to four build rooms.

Huge Caves — There could be up to five ports of entry and exit in each of the three large cave layouts. The network complexity is the most difficult of all caves, and it contains several lethal riddles. In addition, there could be up to eight distinct constructed rooms in the caves.

Now that you know about all major Rust Monuments, put this knowledge to good use the next time you play.

Why Should You Deploy Logistics Management Software as a Service?

TOP 10 WIRED AND WIRELESS HEADSETS FOR STREAMING AND GAMING

How to Maintain a Social Life in Retirement

How to Select a Hairstyle That Flatters Your Face Shape?

How to Correctly Promote Your Interior Decoration Brand on Instagram

Seven Reasons to Use Healing Crystals

What Is the Ideal Process for Crypto Margin Trading?

How to Prepare for a Road Trip